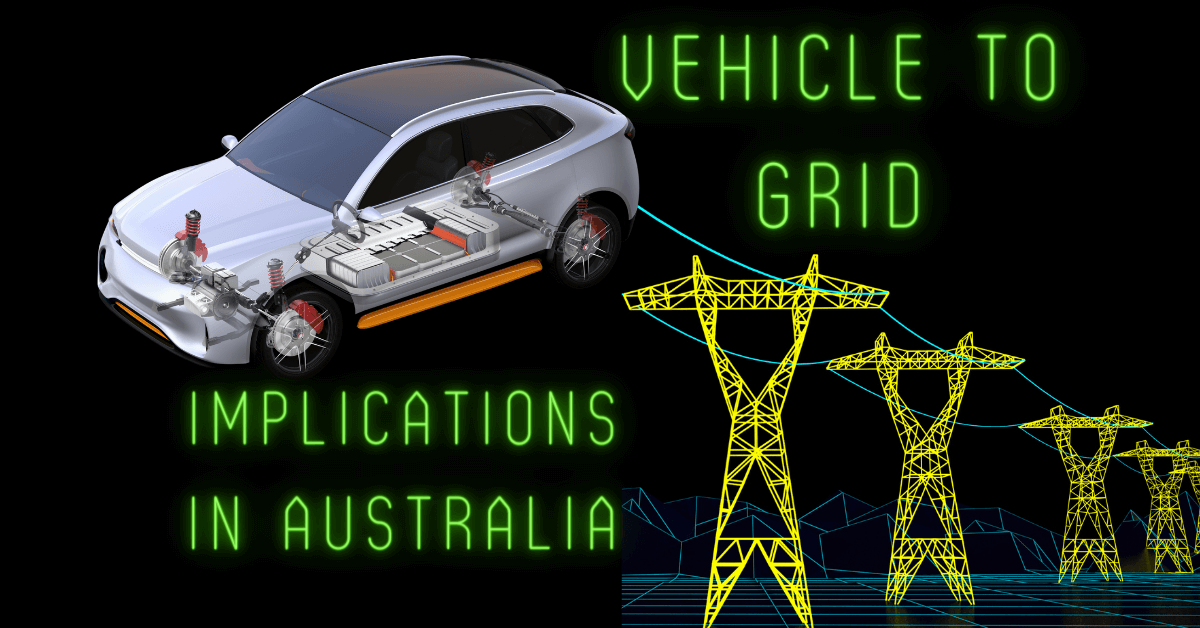 Electric vehicles (EVs) are becoming increasingly popular and it is forecasted that by 2030, one third of cars sold will be electric [1]. This increase in electric vehicles poses a challenge to the National Energy Market (NEM) on how to best manage the charging of these EVs without causing volatility in electricity demand and prices. Conversely, the influx in EVs also provides a huge opportunity to increase the grid’s stability and energy security. The average EV has a battery sized at 43kWh [2] and the average commute is 16km each way [3]. Taking into account that the Australian home uses 19kWh [4] of electricity daily and the average fuel economy of EVs is 18kWh/100km [5], a fully charged EV that undergoes the average commute has the capacity to supply power to a home for almost 2 days. Moreover, if an EV is equipped with the right software and hardware it is capable of both receiving and supplying energy, otherwise known as bidirectional charging. This bidirectional charging or “Vehicle to Grid” scheme has huge implications for the future of Australia.

Currently, many renewable power stations have their outputs curtailed due to insufficient demand for the energy they are producing and inadequate amounts of energy storage. Maintaining grid quality is a constant challenge at both the local level and network level and in order to maintain grid quality there are a range of ancillary services and mechanisms. If EVs are plugged into the grid via advanced bidirectional charging stations, the excess energy produced by renewable sources can be stored in the batteries of EVs nationwide at low costs. The EV batteries can then act as a Distributed Energy Resource (DER) that can participate in demand response such as the frequency control ancillary service (FCAS) markets.

This would be at a higher price than purchased, providing you profits on top of greater energy security for the grid. These bidirectional chargers will be equipped with intelligent software that will allow you autonomy on how long the grid can use your EV’s battery, how much of it, the minimum charge to be left in the battery and what time your car should be ready for use. This is known as vehicle-to-grid (V2G) and with enough uptake in electric vehicles and public engagement, it can completely transform the way the grid operates. In fact, if all 19 million Australian vehicles were electrified, these would provide the same energy storage capacity as five Snowy 2.0 pumped hydropower schemes [6].

Where are we currently?

AS/NZS 4777.2 is the Australian standard for Inverter Requirements. Within the standard, clause 1.4.13 has been updated to include “vehicle to grid capable electric vehicle supply equipment is a type of multiple mode inverter” and clause 2.3.3.2 to state that “pluggable type B equipment for an electric vehicle is to be used in an inverter energy system…in accordance with IEC 61851-1.” More about this standard can be found in another technical article written by GSES called ‘AS/NZS 4777.2 2020 Updates – What You Need to Know’. Internationally, ISO15118, an international standard for road vehicles — vehicle-to-grid communication interface, is set to release in the second half of 2021. The update and development of these standards indicates a shift towards facilitating the use of V2G. The majority of EVs utilise two types of charging technology: CHAdeMO and Combined Charging System (CCS). Currently, CHAdeMO is capable of V2G whilst CCS will not support V2G until 2025. This causes a major lag in the uptake of V2G as the majority of EVs use the Combined Charging System (CCS) technology.

According to the key findings of a report by UK Power Networks [7], as of 2018, 50 V2G projects are underway of which 25 are in Europe and 18 in North America with the USA leading development in this sector. Of these projects, 98% included technical aims highlighting the emphasis placed on developing V2G technology. The report also found that whilst 12 vehicle manufacturers have undergone V2G projects, Renault Nissan and Mitsubishi run the majority of these projects. However, in the 3 years since the report, V2G projects have increased by over 50% with 80 projects now active globally.

There are also a number of pilot programs being run globally with the Realising Electric Vehicle-to-grid Services (REVS) project running in Australia. The $2,400,000 REVS project is a part of the Australian Renewable Energy Agency’s (ARENA) ‘Advancing Renewables Program’ and is being run by ActewAGL. According to ARENA, it “aims to demonstrate V2G technology providing contingency FCAS to the National Energy Market (NEM), complemented with a holistic roadmap for the mass deployment of the full value stack of V2G services. This will lead to new V2G enabled service offerings for fleets and residential customers.” Specifically, 51 Nissan Leaf vehicles will be deployed across the ACT and 7 organisations will be a part of the process to build a small scale network of EVs to test how V2G will support the grid in critical situations.

The Future of Vehicle-to-Grid

The future of V2G is incredibly exciting as more research and development into technology is undertaken and more countries look to V2G to increase energy security during the transition to net zero emissions. However, the roadmap for Vehicle to Grid in Australia is still relatively uncertain and the REVS project, set to finish in early 2022, will be key to proving the concept to investors and policy makers. In Great Britain, the National Grid Electricity System Operator’s Future Energy Scenarios program, has predicted that up to 45% of households in Great Britain will provide V2G services with it seen as an important mechanism to help achieve net zero emissions. However, one large stumbling block in the short-term future is the lack of bidirectional charging capability in CCS battery technology (the battery technology used in most EVs today). CCS technology will have V2G capability in 2025, and until then, there will likely be little to no progress made.

Due to the complex nature of V2G, it is predicted that vehicle-to-home (V2H) will be the first step. V2H is different to V2G as it only allows the EV’s battery to operate within the household’s electricity system, whereas V2G allows the EV’s battery to operate with the grid.  If you have rooftop solar, V2H will allow you to store energy produced by your solar panels just like a normal installed battery storage system. This has a range of benefits such as allowing you to engage in retail arbitrage where you can choose to use stored energy during peak demand to decrease electricity costs as well as increasing your PV self-consumption which is more financially beneficial than exporting excess solar energy and providing a backup power source in case of a blackout.

There are still several challenges to overcome to successfully implementing Vehicle to Grid in Australia. Planning and development of strategies to manage the increased demand for energy from EVs will be essential. This extra demand may create market volatility if the appropriate market structures are not put into place.  With the appropriate price signals and customer engagement the problems that may arise from this extra demand can be mitigated and further, the opportunity these EVs present to support the grid can be harnessed.

The cycle life of an EV’s battery is an important aspect that you will need to consider. The cycle life of batteries is the number of charge and discharge cycles that a battery can complete before losing performance. V2G will require EV batteries to charge and discharge more frequently, going through the cycle life quicker and therefore decreasing the batteries’ lifetime. Hence, battery manufactures will need to address this and develop ways to improve their batteries’ performance.

V2G’s success ultimately hinges upon public engagement. Without a willingness from consumers to plug their EVs in for extended periods of time, V2G will not be effective. In The A-Z of V2G , a comprehensive review of international V2G projects by Australian National University researchers, the 6 major challenges posed by users are: awareness, flexibility & convenience, symbolic meaning, control, cost, efficiency & cybersecurity and connection & standards. Lack of awareness and misinformation can easily lead to public perception on V2G becoming negative, becoming seen as a breach of freedom and control when forced to plug in their EVs into the grid for uninterrupted periods of time. The importance of education and awareness of the technology’s benefits, as well as financial incentive, will be paramount to overcoming this.

With the undoubted uptake in electric vehicles over the next decades, the amount of battery storage potentially available in these electric vehicles is huge. Financial incentives, planning and technological advances could allow for V2G to become a DER that can be deployed by grid operators to supplement peak demand. These also can provide ancillary services and capture excess energy from renewables all whilst providing the opportunity to earn money. Of course, like any technology, it does not come without its challenges and the next decade will be pivotal for the success of V2G. Nonetheless, the future for Australia looks bright for Vehicle to Grid and the technology looks poised to revolutionise the energy industry and the way you use your electric vehicle.