The Island Nations in the Pacific rely predominantly on diesel generators in large or micro-grid configurations for power supply. These Nations have turned to Renewable Energy (RE) to reduce their exposure to diesel prices and lead the transition to low carbon economies.

As a whole the Pacific has similar challenges to rural Australia; large dispersed populations, diesel formed mini grids, challenging environmental conditions but this is where the similarities end. These Island Nations have diverse populations, unique languages, cultures, limited land masses and the majority of RE generation is owned by the utilities.

Organisations and government energy utilities from across the region attended the PPA and presented information on diesel generation, waste heat utilisation, advanced metering technologies and renewable energy. Not surprisingly much the same as in Australia, the buzz word on everyone’s lips was energy storage. As such this article will cover some of the findings that relate to Australia, the challenges and what the energy transition to a low carbon future might look like.

Experience in the Pacific Islands has shown that increasing RE penetration of intermittent generators on a diesel formed energy network can lead to unstable and unreliable energy generation or high electricity costs. This is the energy Tri-lemma. As seen in the figure below. Increasing intermittent RE penetration in a network can only typically be reliable if additional capital expenditure is made at the outset. 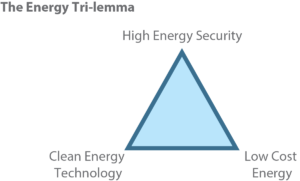 For example increasing PV generation, into a diesel formed grid, results in escalating costs required to ensure the generator has sufficient spinning reserve to compensate for a sudden drop in renewable output. The generator must be maintained at low capacity in order to ramp up quickly (in the order of 5-10 seconds) and excess PV generation must be wasted to ensure that the generator is protected from energy back feed into its systems. This increases the cost of operating and maintaining generators, wastes fuel and PV generation. The system can only be stabilised by upgrading control systems and installing energy storage technology, resulting in increased energy costs to consumers.

However with the costs of batteries coming down it can be seen in the following two case studies batteries are being utilised to meet network and utility demands to form reliable and low cost energy systems.

On Ta’u the price of electricity was 65c/kWh. After the installation of the PV and battery system the cost of electricity has dropped to 32c/kWh with an expected payback of 3 years. The total cost of the project was $11 Million US dollars.

Vector the network operator in Auckland, New Zealand has been rolling out battery systems as part of their network upgrade project. Vector anticipates that there is approximately $2 Billion worth of network upgrades required over the next 10 years.

The selected battery system cost $5 million dollars and was installed in 4 months and did not require any upgrades to the existing electrical infrastructure with only the installation of additional cabling between the transformer station and the battery installation. In addition to the reduced cost (reduced sunken investment) the battery system has the advantage of being moved if required, upgraded easily and expanded if necessary, eliminating the risk of stranded assets.

Vector have been monitoring and evaluating the system performance and found the system:

GSES has worked in the Pacific providing capacity building, training local technicians and electricians in the design, installation, operation and maintenance of PV energy generation technologies. Part of our mission is to enable self-sustainable training so nations can develop training solutions under a unified framework.

In summary, the findings of conferences such as the PPA can offer Australia an insight into alternative energy solutions that provide reliable clean energy networks. Batteries may not be quite economical in Australia just yet but that time is coming soon so make sure you are prepared for the battery revolution and get on board one of GSES’ battery storage training courses.