In the past months, there have been many discussions centered around pumped hydro storage schemes. Most notably of which is the current government announcement to expand the iconic Snowy Hydro system as well as South Australia’s investigation into pumped hydro from Spencer Gulf.

It is well-known that some renewable energy systems are intermittent and their output behaviour is unpredictable and weather-dependent. Hence, when they are connected to the grid, frequency regulation and power quality can become an issue and it raises questions of reliability. To solve these issues of reliability, and to accommodate inexpensive renewable energy, changes to the energy market and its regulation must occur. However the technical solution that will unlock the full potential of renewable energy is the deployment of energy storage on a large scale.

Pumped Hydro-electric storage is a mature and established concept of energy storage as it has been in operation since the 1890s. It is the largest available grid storage system in the world constituting 97% of the world’s total energy storage (~143GW over 40 countries). The European Union and Japan have the biggest systems with net capacities of 38.3GW and 26.2GW respectively and it acts as their major energy storage system. It has been traditionally used to balance the base-load power plants (coal, gas etc.) by allowing them to operate at peak efficiency and lowering the need for peaking plants that operate on gas or oil. With the rise in renewable energy penetration into the grid and the need to handle the intermittent nature of these energy sources, pumped hydro storage system are being given serious thought to help abate the fluctuating output generated.

How does pumped hydro work?

This system works by pumping water from a lower reservoir to a higher reservoir using the excess energy in the grid. This stored water in the form of gravitational potential energy is then released when prevailing demand exceeds currently connected generation and it flows through a turbine (kinetic energy) and generates power. The energy consumed to pump water to the upper reservoir is higher than generated by the water flow through the turbine to the lower reservoir. But this negative net energy consumption is offset by the cost savings achieved compared to the cost of energy if sourced from a peaking generator.

In the case of a solar pumped hydroelectric storage system, the solar PV array is connected to the grid and the excess generated power is used to pump the water from the lower to upper reservoir. The same applies to wind generator systems. 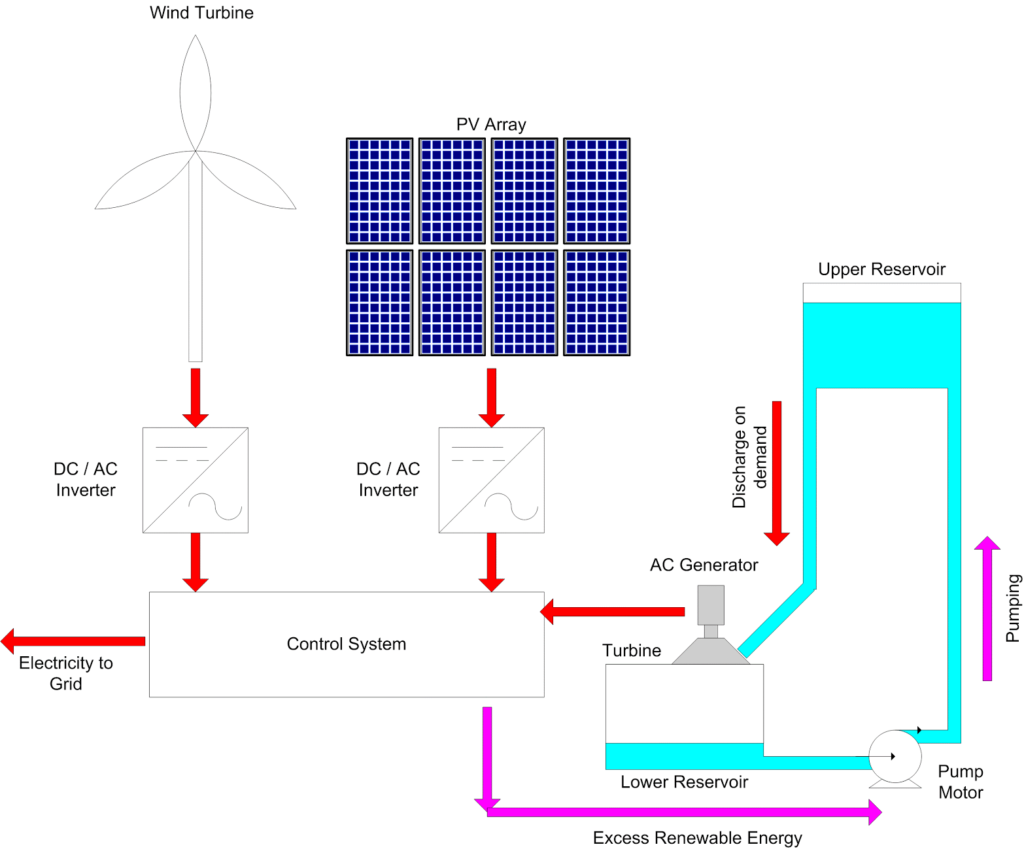 The potential energy stored in the water can be calculated using the formula:

These systems are usually constructed in geographical sites where there are two natural reservoirs that are separated by an elevation greater than 300m or where there is a small mountain near a water resource where excavation of the upper reservoir/dam wall construction can be done. They can also be built near the ocean where the sea-water can be pumped up to a natural or an artificial reservoir in a higher ground level like the Okinawa Yanbaru Plant in Japan (although decommissioned in 2016 due to inaccurate demand forecast and not being profitable as a business).

The above plant has been an inspiration to the development of a large-scale 300MW solar pumped hydro storage system on the coast of Atacama Desert in Chile. This region has all advantages of natural dried up lakes on hilly areas at the coast which would form the upper reservoir combined with high levels of solar radiation, making it an ideal site for a solar and pumped-hydroelectric plant. It is expected to be up and running by 2020.

Barriers to this technology

Identification of a geographically suitable location for the installation of this system is the main challenge. Other challenges include the potential relocation of nearby communities to a safe location, alteration of the ecology in the existing river system or stored energy losses due to evaporation. All project barriers require attention before committing the project.

Australia currently has 3 successfully running pumped hydro stations: Tumut 3 (0.6GW) and Shoalhaven (0.24GW) in New South Wales, and Wivenhoe (0.5GW) in Queensland. Realizing the advantages of this technology relative to other storage systems, Australian National University (ANU) has undertaken a mapping project to identify potential sites to install short-term off-river pumped hydro storage systems. These sites are dams or reservoirs that are elevated at a height of about 300 to 600 metres from each other. The most recent project approved for development is the ‘Kidston Pumped Storage Hydropower Project’ by Genex Power, where the old Kidston gold mine in northern Queensland will be converted into a 330MWh pumped hydro storage system alongside a 150MW solar PV array system to help smooth out the availability of electricity generated by the solar PV array. This is an interesting prospect as Australia has thousands of disused mines and whilst not all may be suitable, the lower reservoir is already available.

Batteries have kindled excitement among people recently, especially after a certain billionaire tech entrepreneur’s tweet about a large-scale battery storage solution for South Australia after the recent load shedding event. There is no doubt that batteries will play a major role in the transition of the energy sector from traditional power generation to renewable energy technologies. But there is also the question of operational lifetime, power performance, charging capabilities, safety and system capital cost which make large-scale battery storage questionable for installation when compared to pumped hydro storage. The main advantages of battery systems are rapid and distributed deployment compared to lengthy civil works and approval processes. Ultimately, the best solution is probably a good mix of technologies.

Pumped hydro storage is an established technology that has been in operation for over a century, the initial capital cost is very high (mainly due to the civil works of dams or reservoirs), it has higher overall efficiency of around 76% to 85% and a very long lifespan of more than 60 years. But still, a pumped hydro storage system has the lowest energy density when compared to other systems. Also, building a pumped hydro storage system is a lengthy and complex process sometimes taking up to 10 years including permits for constructing dams and reservoirs.

Due to technology feasibility and efficiency compared to other options like batteries, pumped hydro storage is an economic solution that seems to pose a lower investment risk when compared to any other storage system. Solar Pumped hydro storage can also be integrated with battery storage, where the solar generated power can be used to pump water and the excess can again be stored in a battery storage system which could provide very rapid demand response. It will incorporate inverter conversion losses to and from battery, but is feasible. The variable costs of a pumped hydro plant has to be taken into account and compared with the forecasted battery costs, before economic viabilities of these projects are penned down. Critical to the deployment of pumped hydro are policies and long term plans and strategies, as it is not an overnight solution.