As installed system capacity continues to increase in the Australian PV market, it is valuable for system designers and installers to understand the mechanisms behind moulded case circuit breakers, and the meaning behind their ratings.

A moulded case circuit breaker (MCCB) is a type of electrical protection device that is used to protect the electrical circuit from excessive current, which can cause overload or short circuit. With a current rating of up to 2500A, MCCBs can be used for a wide range of voltages and frequencies with adjustable trip settings. These breakers are used instead of miniature circuit breakers (MCBs) in large scale PV systems for system isolation and protection purposes.

How the MCCB operates

The MCCB uses a temperature sensitive device (the thermal element) with a current sensitive electromagnetic device (the magnetic element) to provide the trip mechanism for protection and isolation purposes. This enables the MCCB to provide:

Overload protection is provided by the MCCB via the temperature sensitive component. This component is essentially a bimetallic contact: a contact which consists of two metals that expand at different rates when exposed to high temperature. During the normal operating conditions, the bimetallic contact will allow the electric current to flow through the MCCB. When the current exceeds the trip value, the bimetallic contact will start to heat and bend away due to the different thermal rate of heat expansion within the contact. Eventually, the contact will bend to the point of physically pushing the trip bar and unlatching the contacts, causing the circuit to be interrupted.

The thermal protection of the MCCB will typically have a time delay to allow a short duration of overcurrent which is commonly seen in some device operations, such as inrush currents seen when starting motors. This time delay allows the circuit to continue to operate in these circumstances without tripping the MCCB.

In addition to tripping mechanisms, MCCBs can also be used as manual disconnection switches in case of emergency or maintenance operations. An arc can be created when the contact opens. To combat this, MCCBs have internal arc dissipation mechanisms to quench the arc.

MCCB manufacturers are required to provide the operating characteristics of the MCCB. Some of the common parameters are explained below:

MCCBs in an electrical circuit should be sized according to the circuit’s expected operating current and possible fault currents. The three main criteria while selecting MCCBs are: 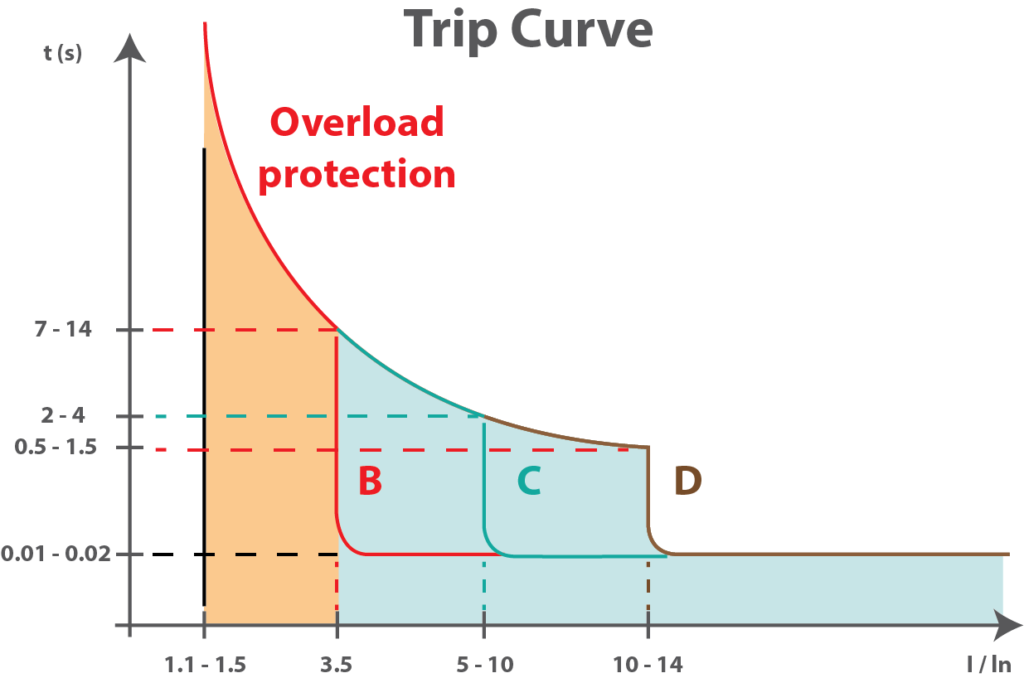 MCCBs are subjected to high currents; therefore maintenance of MCCBs is critical for reliable operation. Some of the maintenance procedures are discussed below:

During the visual inspection of a MCCB, it is important to look out for deformed contacts or cracks in casing or insulation. Any burn marks on contact or casing should be treated with caution.

Some MCCBs require adequate lubrication to ensure the smooth operation of the manual disconnection switch and internal moving parts.

The dirt deposits on MCCBs can deteriorate the MCCB components. If the dirt includes any conducting material it may create a path for current and cause an internal fault.

There are three main tests that are carried out as a part of maintenance procedure of a MCCB.

This test is conducted by testing the resistance of the electrical contacts. The measured value is compared to the value specified by the manufacturer. Under normal operating conditions, contact resistance is very low since MCCBs must allow operating current through with minimum losses.

This test is conducted by testing the response of the MCCB under simulated overcurrent and fault conditions. Thermal protection of the MCCB is tested by running a large current through the MCCB (300% of rated value). If the breaker fails to trip, it is an indication of failure of thermal protection. The test for magnetic protection is conducted by running short pulses of very high current. Under normal conditions, magnetic protection is instant. This test should be conducted at the very end as high currents increase the temperature of contacts and insulation, and this may alter the results of other two tests.

The correct selection of MCCBs for the required application is key to providing adequate protection in sites with high power equipment. It is also important to carry out maintenance actions at regular intervals and each time after trip mechanisms have been activated to ensure the safety of the site is maintained.