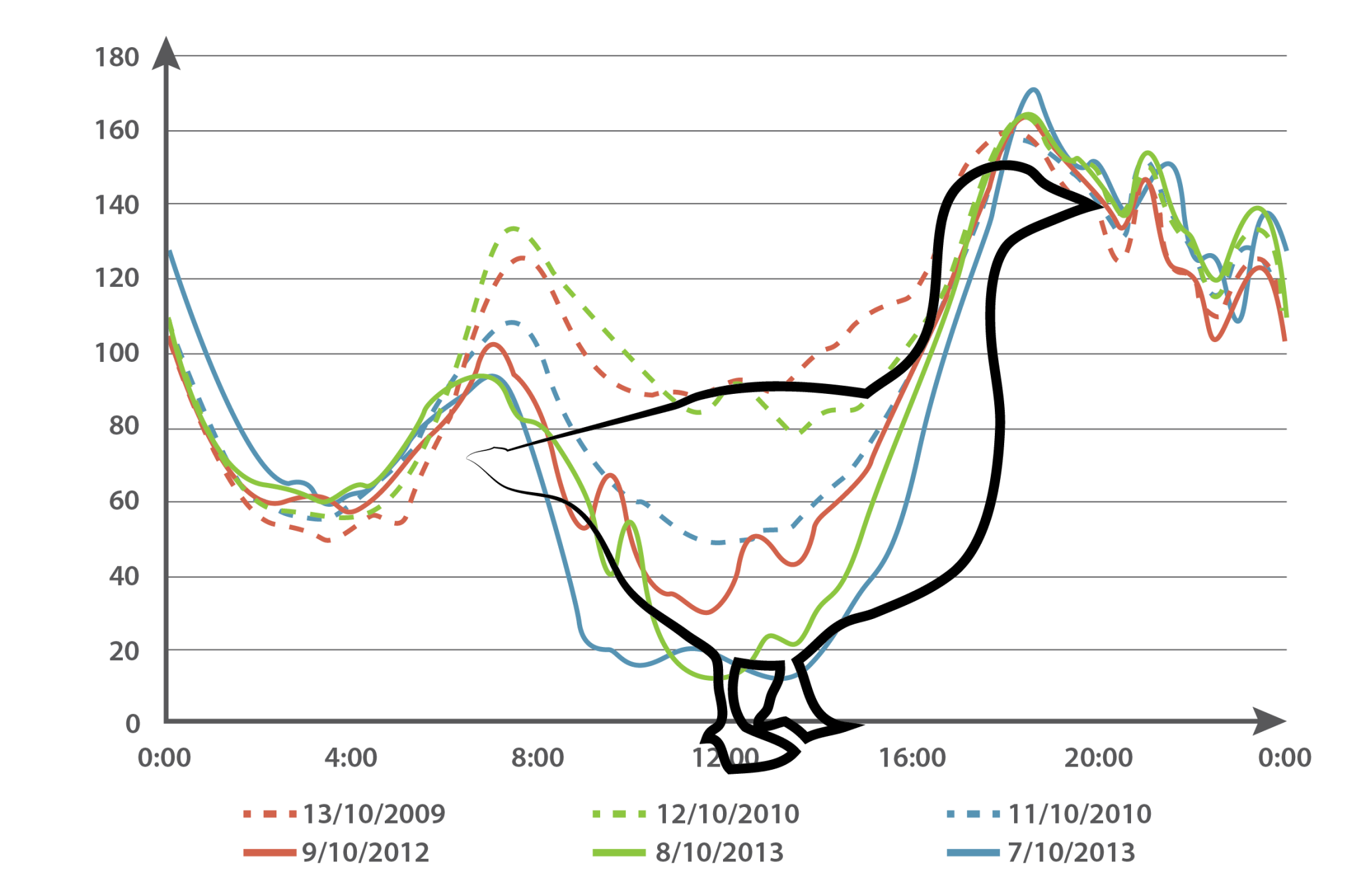 The power blackout in South Australia in September 2016 produced numerous ‘experts’ to analyse the causes of this event. The Australian press, politicians, shock-jocks and the public all had their particular slant to apply when assessing why this catastrophic failure occurred.

GSES thought it opportune to provide some contextualised background to how distributed renewable generation, particular distributed solar PV systems, affect the overall power distribution system in Australia, what this really means and to highlight strategies for the successful integration of these renewables over the longer term.

Network Load Profiles and Solar Generation
The electricity load profile of a network shows the amount of energy that is required over a period of time. This load profile not only provides information on energy consumption, it also shows how much generation capacity is required to meet high electricity demand and how quickly it is needed.

Before renewable energy started its embedded generation market drive, the daily load profile of distribution networks in residential areas has been described to resemble a camel with visible humps in the morning and from the afternoon to late evening. These humps can be explained by residents using electricity prior to leaving for work or school, and returning home in the afternoon and turning on appliances and lighting.

Flattening the Duck Curve
Critics of renewable energy often point out that the fluctuating output of weather-dependent renewable energy sources do not always reduce peak demand, and that their variability puts ramping pressure on conventional generators. Whilst it is true that renewables can be disruptive to the conventional methods applied to the planning and operation of the electric grid, these effects are certainly manageable.

Forecast Renewable Generation
Solar PV and wind generation introduces complexity into the network due to generation fluctuations over different times and areas as a result of local weather, introducing an additional factor to network planning and operations.
One might be quick to suggest that there is no way to have large amounts of renewables without destabilising the balance of the grid. However, it has been shown that the predictability, and therefore reliability, of renewables increases as the number of renewable generators increases.
The unknown predictability of renewable energy generation has reduced dramatically as the percentage of renewable make-up increased. According to the Law of Large Numbers, the variability of uncertain circumstances is more predictable once the number of these processes increases. An entire industry has been built around interpreting data from the internet and other scientific sources. High tech businesses now offer algorithms and strategies to take the guesswork out of performance prediction and, equally importantly, financial returns. Many network operators require predictive information be provided as part of their interconnection assessment processes.
Once the network operator has reliable information on the energy availability and ramp rates of renewable energy generation, the market can then be operated reliably and effectively.

Diversify Energy Mix
The duck curve is a phenomenon of high solar PV penetration only. It does not describe the effect of wind, nor hydro, nor solar thermal generation. Despite claims on the intermittency of wind power, wind has been the provider of baseload power to South Australia to the point of closure of the Northern brown coal generator.

Utility-scale PV systems and wind farms also have the capacity to ramp output as required, weather permitting. Hydro and solar thermal plants can also time their dispatch to coincide with expected high ramping demand. Energy storage can also be deployed in targeted locations to dampen ramping demand while concurrently deferring investments in new grid infrastructure.
As to what individuals can do at the distributed PV system level, the duck curve effect can be lessened with west-facing PV arrays. This enables more displacement of the system owner’s afternoon needs and reduce the ramping demand seen by the network.

Demand Side Management
Fundamentally, the electricity grid is a balancing act of matching the supply of energy to consumer demands. Therefore, if supply is constrained, another solution is to reduce electricity demand. This is known as demand side management, and can be achieved in a multitude of ways.

One way of demand side management is introducing and promoting energy efficiency measures, especially on loads which are operating during the hours which ramping demand occurs, such as lighting and air conditioning units.

Many appliances now also come with demand response enabling devices (DREDs), which enables network operators to remotely control and moderate power consumption on a broad scale. However, user uptake of these appliances requires user awareness and participation. One such program is Energex’ Positive Payback program which incentivising energy users to install air conditioners that are installed with DREDs.

As of October 9th 2016, all PV inverters compliant with Australian Standard AS4777.2:2015 must have demand response modes which enables network operators to disconnect the inverter (DRM0) and to not generate power (DRM5). Inverters compliant with this standard should also support other demand response modes which limit power consumption and generate at reduced output.

Another way of managing the demand is by market signals and behavioural change. Time of use tariff structures send price signals to energy users to shift loads to either side of the peak demand. Energy users on time of use tariffs who are aware of the tariff structures often actively shift their consumption away peak tariff times to avoid high energy bills. This can be done via timers, programmable appliances, the Internet of Things and conscious manual switching. Encouragement of electrical vehicle uptake and charging during PV generation hours is another way to balance out the load profile while displacing petroleum consumption.

Achieving the Best Outcomes
A perfect energy mix requires careful planning to ensure that a mix of energy sources that complement each other are available to meet our energy demand over the day. However, it also requires the participation of educated energy users to change their energy consumption patterns. Incentives need to be present at the policy level to encourage diverse mix of generation, at the grid operation level to allow appropriate operation of individual power plants and at the user level by changing and reducing electricity demand to achieve a more stable grid.
It is clear that uniform and forward thinking policy and incentives are required to be introduced to the market to drive the success of that planning.is required to achieve the optimum combination of power generation sources, dispatch capacity, and lessened stress on the utility network.