Absent from this list are abundant amounts of sunshine and wind. And given the falling costs of solar and wind power coupled with Australia’s massive natural resource export capability, Australia finds itself lucky again as the Hydrogen economy begins to take form. Cheap renewables are already unlocking a number of new or advancing technologies including lithium-ion batteries, new energy trading platforms, electric vehicles and new grid support functionality. Now cheap renewables are driving the development of a whole new economic system; The hydrogen economy. The National Renewable Energy Laboratory based in Colorado, USA has produced the chart below showing the various inputs and outputs of the Hydrogen economy. 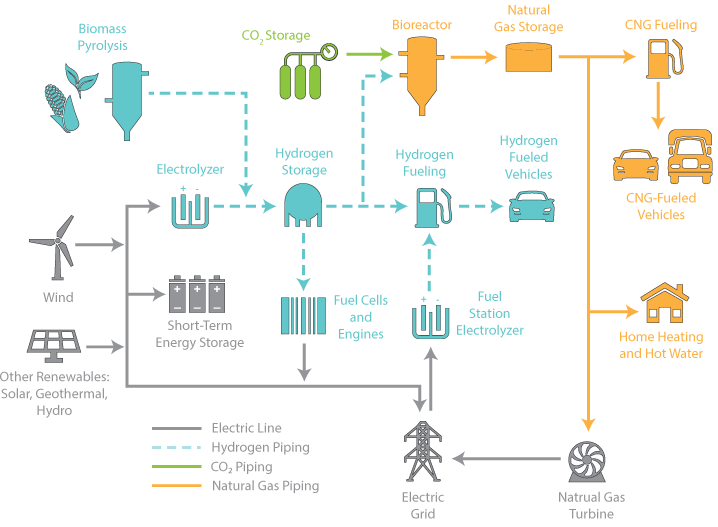 Why would one produce Hydrogen as opposed to storing energy in a battery?

Batteries can perform market arbitrage or provide ancillary services like frequency control ancillary services (FCAS) (Guide to Ancillary Services in the National Energy Market) or network support services like voltage control ancillary services (VCAS) (Non-Market Ancillary Services) or provide local backup power, but all of these value streams are constrained by the “stationary” nature of a large battery. On the other hand, Hydrogen can do these things and a lot more. Hydrogen can be incorporated directly into the transportation system (hydrogen cars, busses, trains, etc.), mixed into CNG for heating homes and fuelling CNG vehicles, stored and converted back into electricity via fuel cell, provide combined heat and power for industrial processes or exported for overseas markets. In addition, hydrogen can be used to make fertilizers (Haber process), to produce methanol, for welding, for rocket fuel, the production of hydrochloric acid, the reduction of metallic ores and in the hydrogenation of fats and oils. Put simply, hydrogen is a versatile product with many off-take opportunities available to it due to its “portability”. Add to this that it can be produced cheaply and carbon free and it quickly becomes an attractive investment vehicle.

The hydrogen economy also represents a way for mature energy markets or resource rich markets to reach foreign markets with high energy demand. In fact, this is cited as a key reason for Australia to develop its hydrogen infrastructure.   In a recent briefing titled “Hydrogen for Australia’s Future” for the COAG Energy Council, Dr. Alan Finkle, the Chief Scientist of Australia stated that “Japan’s commitment to be a large-scale enduring customer” is a key reason, along with the low cost of renewables, why Australia should develop its hydrogen economy as soon as possible. This echo’s the wording used in an ARENA funded report tilted “Opportunities for Australia from Hydrogen Exports”. ARENA subsequently awarded $22M to 16 research teams with the directive to find innovative ways of expediting the development of the hydrogen economy in Australia.

Doesn’t Australia actually have the highest electricity prices in the world?

As was reported by AFR, Bloomberg and others last year the answer is, yes, but not always and not at wholesale. See below the screen capture from NEMWATCH showing very low spot pricing in some states and negative spot pricing in TAS. This low pricing could be used to charge batteries, pump water for storage or produce hydrogen. The result of this may ultimately be a flattening of energy prices, better load/generation balance and the ability for Australia to access other markets through the sale of Hydrogen. 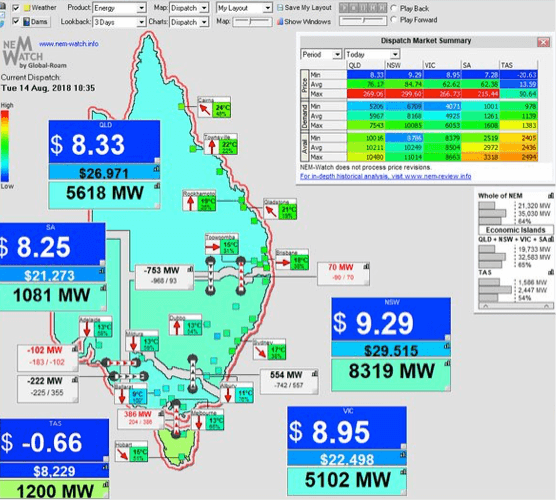 It is encouraging to see some key bodies moving in the right direction with regard to Hydrogen infrastructure development, though what the Hydrogen Economy really needs is some significant investment.   Though GSES feels that this investment won’t be far away, we remain interested to see who will emerge as the major players and innovators in the development of local and export hydrogen markets.