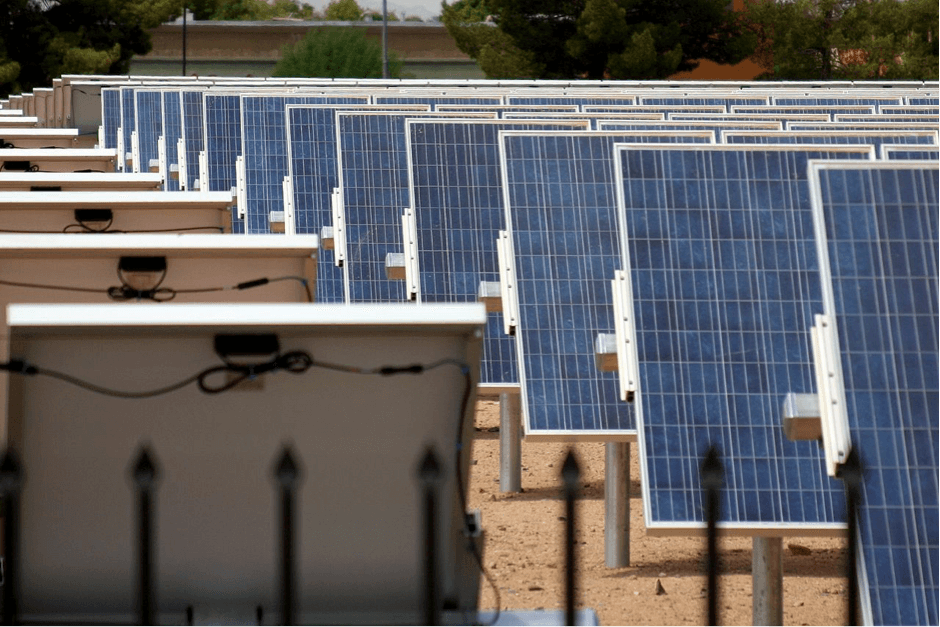 Any PV installer or system designer knows that, in Australia, orienting a system north would enable the maximum year-round generation. For sites where a north facing pitch is not readily available, east west array is often considered the next best solution. Intuitively, south facing arrays do not make sense, and systems have been designed insofar where PV modules installed on southerly slopes have been tilted away from the roof surface to face north.

But what exactly is the reduction in generation? Is a south-facing array by default to be avoided at all cost, or are there cases where it may prove to be beneficial to the client?

It is expected that arrays with southerly aspects would have higher generation in summer and lower generation in winter, compared to east and west facing arrays, but the exact effect of it needs to be quantified and measured to provide guidance to installers and designers.

The PVSyst analysis was carried out to compare the output of, 50-50 split, east-west and north-south facing arrays in all capital cities in Australia. The arrays are split evenly between the two aspects, with the output of the whole system calculated at 10°, 15°, 20° and 30° pitch. The minimum pitch angle was chosen assuming that modules will always be pitched to a minimum of 10° to aid self-cleaning. 15° and 22.5° are common pitch angles for Australian homes. The pitches 15° and 20° ( an approximation of 22.5°) are therefore chosen for analysis. 30° is chosen as the maximum pitch angle for ground mount array arrangements which strikes a balance between inter-row spacing and system yield in larger designs.

The results are displayed in specific yield per day (kW/kWp/day).

The PVSyst analysis results shows that at most locations, the specific yield is similar at pitches of 10° and 15°, may be acceptable at 20° for most locations, but starts to become significant at 30° for all sites other than Darwin. Darwin, being in the tropics, shows that a north-south array suffers similar losses to east-west arrays regardless of array tilt angles.

This finding shows that having a significant amount of the subarray facing South may not be as detrimental on system yield as one would intuitively think.

While the south facing array has less output in winter months in a north-south array arrangement, it is offset by the arrangement’s higher output in summer months, compared to east-west arrays. This means that north-south facing arrays may be beneficial for residential systems which experiences high loads in summer e.g. for air conditioning, but have much smaller heating loads in winter. For example, south-east Queensland households may not have high heating loads in winter, but have significant cooling loads in the summer, where having additional arrays on the south facing roof can help reduce the electricity bill.

The system owner would need to be provided site specific monthly energy production estimates for east, west and especially south facing arrays so as to avoid bill shock.

The analysis finding is applicable to commercial applications for a few reasons: allowing north-south facing arrays can increase flexibility of system design and increase the array packing density. This information can also be used to guide decision on whether a south facing roof surface can be utilised for installation. Designers may also find that the customer can benefit from better financial return with flush mount southerly arrays compared to tilt adjusting the arrays to face north due to both an increase in packing density and a decrease in installation cost.

East-west arrays pitched at shallow angles on shallow or flat roofs have been demonstrated to increase packing density of the array, enabling larger systems to be installed within the same roof space. At 10° pitch, the difference in yield between east-west array and north-south array is between 0.1-0.3%. Not being restricted to an east-westerly arrangement can allow more flexibility in system design on unusual roof shapes, ensuring a balance between available area, array packing density and access to modules for maintenance is achieved.

Large sheds with shallow pitch of 8-10° may be able to take advantage of existing roofs with southerly aspects using flush mounting of PV arrays. Flush mounting of arrays would reduce the installation cost compared to tilt frame systems. If the options were between flush mount and ground mount PV systems, the cost difference would be even greater. This design would particular benefit manufacturing processes with high refrigeration loads, where the high summer month power consumption can be matched with higher generation.

The inter-row spacing of northerly pitched arrays may even be utilised to achieve higher packing density, which would benefit intensive energy usage sites.

South facing arrays are shown to generate sufficient yield such that when comparing north-south arrays to east-west arrays, they should not be completely disregarded as an option. This knowledge can enable system designers and installers to provide a wider range of PV solutions to perspective customers.

GSES provide feasibility assessment services determining the technical and financial risks and benefits of adding a renewable energy generator or energy efficiency measure, as well as carry out preliminary and detail PV system design services. Contact GSES today to start a conversation on how we can help you.