GSES has conducted PV system installation training on Nauru twice. The most recent training session was conducted by Dr. Rick Potter in November 2016.
Nauru is a tiny island located just half a degree south of the equator and east of Papua New Guinea and the Solomon islands. The island is only 21 km² and one can drive around it at a leisurely pace in about half an hour. Its recent history includes hostile occupation during both world wars, a history of intense phosphate mining operations and most recently as the site of one of the offshore Refugee Processing Centres for Australia. 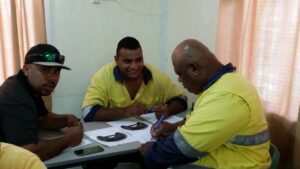 The training was conducted for the Nauru Utilities Corporation (NUC), which is a government organisation that looks after both power and water. Funding for the training has been provided by the International Union for Conservation of Nature (IUCN) which encourages the development and use of renewables in developing countries throughout the world. The head of the NUC, Abe Simpson, sees solar as a significant part of their energy mix into the future and there is a government policy to be 40% renewable by 2020. Nauru does not have consistent, nor strong enough winds to utilise wind energy. However, being located near the equator, Nauru does experience steady level of solar insolation, so solar energy is the natural option. The island experiences 6 peak Sun hours each and every month of the year making solar a reliable power source. Average temperature is 28°C to 35°C maximum and between 20°C and 25°C minimum.

Currently power on Nauru is generated primarily by six diesel generators with a design load of 5MW. Diesel fuel, along with all commodities, building materials and food, are imported to Nauru by ship. This makes it quite expensive. Power generation has recently been augmented by a 500 kW array of non-tracking solar panels on the island which was supplied under a program from the United Arab Emirates (UAE) and installed by Clay Engineering of Fiji. This has been operating since the end of May 2016, and as of early November, had produced a total of 418 MWh. 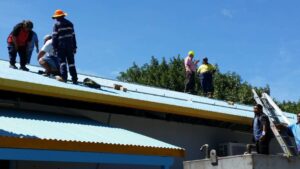 As with many utilities around the world where solar is becoming a significant proportion of the energy mix, Nauru is facing the problem of fluctuation of solar generation into the grid when clouds pass over head. Consequently NUC will be viewing with interest the activity by utilities in Australia as Australian networks battle with similar problems, and are looking to battery storage solutions to buffer these fluctuations.

Many of the Nauruan tradesmen working at NUC have picked up their skills in a hands-on manner rather than with formal electrical apprenticeship or similar training; the nearest formal training available is in Fiji. Nevertheless, what they lack in formal training, they make up for enthusiasm and ingenuity. 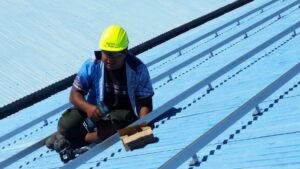 The GSES classes in Nauru concentrated on the installation practical aspects. This was mainly because of time constraints and also to cater to the immediate needs of the systems practitioners. The emphasis of the November 2016 training was to give students hands on experience by installing a 10 kW system onto their facility. Importantly, maintenance and troubleshooting are also included. There will be some at NUC who are aiming to complete the Design part of the course as well.

As the practical installation of the 40 panels and 10kW Tripower Inverter progressed it became clear how useful it was to get the students involved in a hands on practical installation. The LV electrical work was left to students who were suitably trade qualified but everybody participated in the mechanics and the understanding of how the system went together. The system was linked by Bluetooth to a local PC and displayed with SMA Sunny Explorer software on a large LCD TV in the facility corridor for all to see.

The satisfaction on seeing the 10 kW system up and running on the Nauru Utilities Corporation offices was plain to see on the students’ faces. The intention is that within the next month a second 10 kW system will be installed under a project leader provided by NUC. This installation, which will mirror what was done during the GSES training, will be an opportunity to emphasise and consolidate learning outcomes.

The class also took time to visit the 500kW array which was provided by the United Arab Emirates under the aid program. This enabled the students to gain an understanding of the complexities of a larger system and how to implement a neat and well laid out greenfield solar power system. 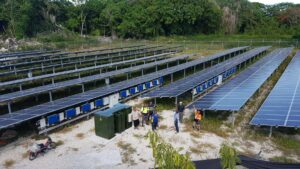